The history of Ongaonga village starts in 1865 when a gentleman named Henry Hamilton Bridge arrived from England and purchased Fairfield farm. Mr Bridge drew up the original plans for the village and would name it after the Ongaonga stream. The Maori’s in the area named the stream after a stinging nettle that grew on the banks of the river. The village served as the social and commercial hub for the surrounding farms in Central Hawkes Bay. Ongaonga contributed greatly to the development of early Central Hawkes Bay and New Zealand. During its peak, Ongaonga was home to many businesses. One of which includes the Coles building and joinery firm. This firm built many of the historical buildings found in Ongaonga and around New Zealand. Ongaonga reached its peak in the early 1900s before motor vehicles contributed to its downfall. The village is now a quiet place and the residents work hard to preserve its rich history. To find out more about the history of the village please look through the timeline below.

In 1851, a gentleman named Donald McLean purchased an area known as Waipukurau. Waipukurau included the land between the Tukituki and Waipukurau rivers. There 70,000 acres of the neighbouring plains that  to George Rich to farm and split into four stations after he gave up on the venture. The four stations were Springhill, Mt Vernon, Forest Gate and Fairfield. The stations would later become the Ongaonga village and surrounding area 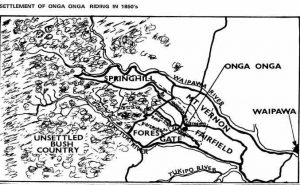 In 1865 Mr Henry Hamilton Bridge immigrated to New Zealand. Mr Bridge brought Fairfield Farm from Mr William Fannin and drew up the original plans for the village. He grew 700 acres of wheat on the farm and would later build a Flour Mill to provide work for the villagers.

In 1869 Mr Bridge built a public room that later opened as the first school and held church services from time to time. This building is now the old school building and belongs to the Ongaonga Museum.  In the same year, a man named James Newman built the first store that stood on the corner of Bridge Street and State Highway 50. 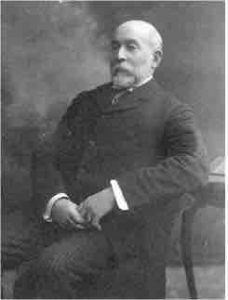 In the early 1870s, James Newman built the first hotel that would burn down many times.

In 1872 Mr Bridge subdivided his land so that plots could for houses and shops.
on the land in 1874.

In 1877 Mr Bridge sent for a contractor from England to gain in the area. His friend Edward Coles would then immigrate with his wife and 12 children. Mr Coles established the Coles building and joinery in 1878. At the time of opening the Coles firm had 17 employees. The Coles building included of carpentry, surveying, blacksmith, electrical and plumbing. An undertaker also worked from the building. The building still stands in its original location. 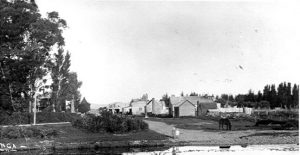 In the 1880s Ongaonga was thriving and had outgrown the small schoolhouse. 1886 to accommodate the growing village. After moving to the bigger school, the old schoolhouse had many uses. It became a roads board, linesmen’s office and a country girls’ club before becoming the old school museum in 1966. During this time there was one road between Ongaonga and Waipawa. Thus another road that followed the Waipawa river on the south side and over the Waipawa Road Bridge. Horse-drawn carriages and later motorised vehicles would use this road. 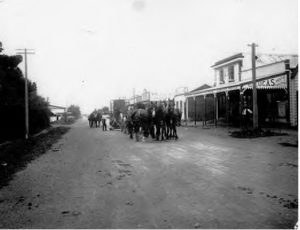 In 1893 floods in Ongaonga proved that the Ongaonga stream was a flood risk. The flooding of the Ongaonga stream changed its course and risked joining the Mate stream. Stock banks built of wooden palisades would prevent a repeat of the event. The Ongaonga stream now prevented further development of Newman Street and Mill Street. Then in 1899 a horse-drawn carriage  ran twice daily between Ongaonga and Waipawa. 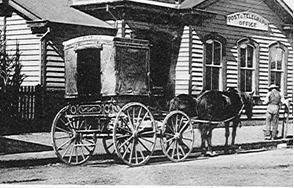 Turn of the Century

In 1900 . This building has since moved to the site of the Ongaonga museum. During the same year, . This building still stands and by the Central Hawkes Bay Council. The Town Hall had many uses, including housing the local brass band.

In 1901 Forest Gate belonged to the government and part of the land became a cemetery. The remaining land became the Forest Gate reserve. During until its closure in 1959. The yard reopened in the 1970s as a lucerne treatment processing plant for a time. into a house.

1904 it was a multi-denominational church, built by Mr Bridge. Then in 1906, the remaining Fairfield Estate off, as Mr Bridge moved back to England. Brothers Firm.

. That same year a bridge over the Ongaonga stream opened. In 1912 the Butcher’s shop opened and has since moved to the Ongaonga Museum site.

In 1914 the beginning of the WWI had started and Ongaonga had a major drought. Due to WWI Ongaonga saw a decline in their 17 business’s, as men had to go away and fight the cause.

In 1916 in the Town Hall this continued every year until 1956. During 1917 the Presbyterian Church opened, Brothers Firm. The church still stands today and can on a walking tour of the village.

During the year 1919 a flu epidemic plagued the area and in that same Ongaonga experienced their heaviest recorded snowfall on 26th of June, which impacted many families. 12 inches of snow fell and brought down power lines, caused damage to homes and closed roads. 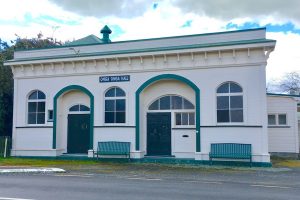 On September 28th, 1925 electricity became available thanks to the opening of the power substation in the area. 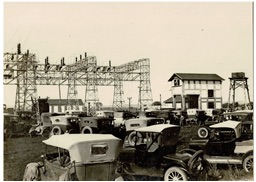 of the power station.

On the 3rd of February 1931, a major earthquake struck Napier and affected the whole of the Hawkes Bay area. Reportedly, the only thing left standing in Ongaonga was the old schoolhouse chimney.

The first miile of sealed road through the village was introduced 1937.

In 1939 – 1944 WW2 broke out and men joined the army, taking away much of Ongaonga’s population and the area declined. 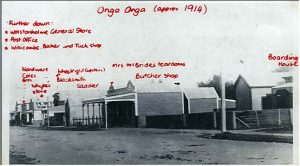 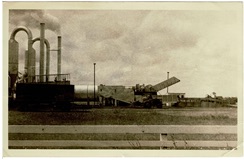 Approximately 1960 the Coles Firm shuts down.

1965 The old school building was under threat as it was no longer in use. Thus, the Ongaonga historical society formed to save the Old School building. Local Mr E.S. Bibby, whose family helped shape Ongaonga became the first chairman. 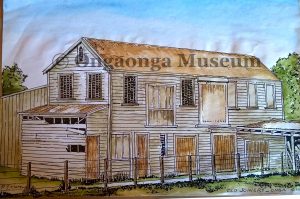 In May 1982 the military hut moved to the Ongaonga museum. Then in 1983 Ongaonga became a Historical Village. During this time plans to preserve the Coles building but out. In 2018 the Ongaonga Historic Society has started critical restoration of the Coles This project relies on donations if you would like to contribute head to org/coles-building to find out more. 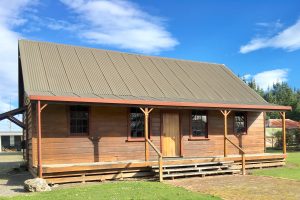 Ongaonga is a small, quiet village and preserves their history through the preservation of the many historical buildings. on the village walking tour and on the museum grounds. The museum holds 13 buildings from around Hawkes Bay. The historical society handles the upkeep of these buildings and relies on the kind donations from visitors and other benefactors.

In 2014 the Coles building and transferred to the Ongaonga Historical Society by the Frater family.

A maintenance conservation plan and is being used for the restoration and preservation of the building under the guidance of Heritage New Zealand. With the support of volunteers alongside our partners carrying out the work.